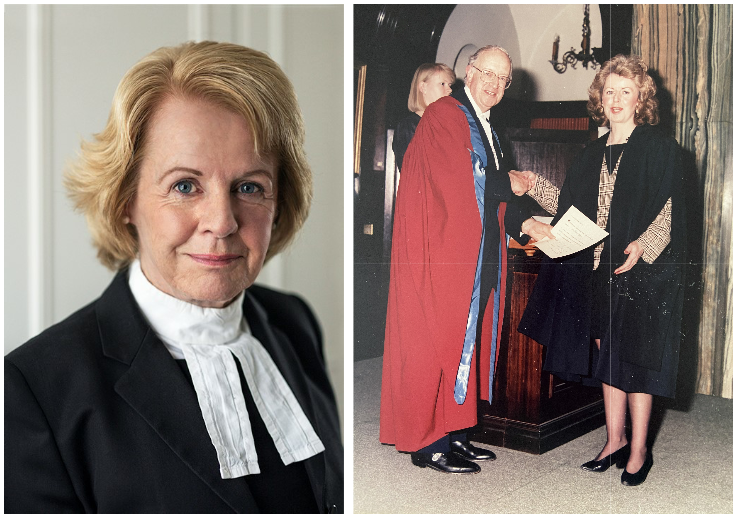 My parents were Irish immigrants who came to the UK in the 1950s when there were signs on windows saying, ‘rooms to let, no dogs, no blacks, no Irish’. I was brought up in Notting Hill but before it was trendy. I left school at 16 and don’t recall knowing any lawyers until I got a job as a shorthand typist with the Treasury Solicitor’s Department.

It was a dull job so I went to Jersey for a month’s holiday but ended up staying 4 years and worked as a Hotel Receptionist. Studying or pensions was not something that entered my mind. Returning to London I got a job in the Legal Department of Wimpeys, the builders, and later I moved to a London Solicitors firm, Michael Freeman & Co. The person I worked for went off on long-term sick so I took over much of her work with the help of the senior partner, Mr Freeman (I would stay in the evenings and he would instruct me). By the time my boss returned, I decided I was quite good at her job, so I went to night school to take what were then FILEX exams. I carried on to the Common Professional Exam and then Law Society Finals, passing them all at the first attempt (many with distinction).

As soon as I passed the Law Society finals, I became a Solicitor because my experience as a Legal Executive exempted me from a training period.

Crime Prosecution Service (CPS) was the majority of my career

My original intention was to specialise in conveyancing, however, the bottom fell out of the property market due to tax changes at that time. Instead, I wrote to the CPS and asked to shadow a prosecutor. This made me decide it was the job for me and I managed to get a month’s contract as a casual lawyer with the CPS which kept being extended until, after a year, I had to be laid off or go before a Board for a permanent position. I passed the Board and was taken on as a Crown Prosecutor. In 1993, a Prosecutor had a far more interesting job and far more autonomy than now. I was responsible for all the work emanating from Ealing Police Station which was everything from e.g. no insurance to murder and included youth work. I decided if there was enough evidence to provide a realistic prospect of conviction or if it was in the public interest to prosecute. Now the power to make decisions has been taken away from Crown Prosecutors and they send the file to a Manager. In my view, this has turned a fascinating job to a much less interesting one.

In 2000, I was granted Higher Court Rights so I could prosecute in the Crown Court, however, at that stage, the CPS Higher Court Advocates were restricted to Pleas and Case Management Hearings etc. whereas now they prosecute whole trials. I think this is far better.

Pros and cons of working for the CPS

The pros of working for the CPS are getting paid a set wage every month and a pension but it is criminal work – you will never earn a great deal of money unless you go into private practice specialising in an area, such as, private fraud cases.

The cons are the lack of autonomy, bureaucracy plus being sent to different Courts in different locations day after day. As a Union representative, I dealt with prosecutors who were distressed because no-one cared about how far the Courts were from their homes or their childcare arrangements. Personally, I found an unacceptable level of micromanagement in the CPS.

Motivation in transferring to the Bar

In 2015, I transferred over to the Bar. I decided what I really liked about my work was advocacy. Although I could have set up as a solicitor advocate, the insurance was significantly cheaper if I became a barrister.

I first joined a chambers but quickly decided I could get my own clients. I took a Direct Access course and as soon as I was granted authority to act for clients directly without the need for an instructing solicitor, I took a course which gave me litigation rights so e.g. I could go on the court record as acting for clients (in reality, although I am a barrister, I can act as a solicitor too).

I am not the usual type of barrister. I describe myself as an ‘Uber type of barrister – the future of the legal profession’. Some obvious advantages are that it is cheaper for the client without an instructing solicitor, particularly, as I have few overheads. Many clients appreciate that I look after the case from start to finish so they have the security of knowing that the person in court has dealt with their case throughout.

My strapline is ‘Looking at a ban – better call Ann’

I specialise in motoring law. As a result, I do not get involved in Legal Aid and I get fixed dates for hearings in the Magistrates Court and for appeals to the Crown Court. A massive bonus for anyone who wants to organise their life, unlike those dealing with the uncertainties of ‘warned lists’.

Steps for transferring to the Bar

First, I had to be a Higher Court Advocate (‘HCA’). When I qualified as an HCA there were two routes to that qualification – either you had to demonstrate to the Law Society you had relevant experience in your field (in my case criminal law) or you had to pass an exam. Having worked for the CPS as a Prosecutor for 17 years I had ample evidence that I had the relevant experience. To transfer over to the Bar there are various hoops to jump through starting with paying £100 to the Law Society to produce a Certificate of Good Standing. I then had to join one of the four Inns – I chose Middle Temple. I had to fill in an application form and be recommended by two Barristers and pay a fee of around £230. After that I had to fill in a lengthy application form and pay the Bar Standards Board another fee of £440. The Bar are willing to accept Solicitor HCAs transferring over to the Bar and exempt them from pupillage, but you have to satisfy the Bar Standards Board that you are a fit and proper person to become a Barrister and have the relevant experience in the relevant field (in my case crime). After approval, I applied to be called to the ‘utter Bar’ which involved attending a very grand ceremony in my chosen Inn.

For the first three years, I was regarded as a new/young barrister (despite my age) and had to take part in the New Practitioners’ course which involved attending mandatory training sessions which I did not find particularly onerous. I did enjoy attending the compulsory dinners at Middle Temple which, although I had to pay for them, I found to be very reasonable (around £50 a go).

If I have any regrets, then it is not becoming self-employed years ago. I am good at what I do, and I love what I do – helping people from all walks of life, meeting different people daily (excluding the time of the pandemic), constantly travelling to different places and saving clients a lot of money. So, despite my age, I believe my business model is the future of the legal profession.